I had just started to walk into the men’s room (hopefully) near my departure gate at the airport in Yangon, Myanmar. After checking the signage and seeing fairly identifiable male/female outlines I turn to the men’s side and freeze in my tracks. There is a young woman coming out of what I thought was the men’s room! I back up, take a look towards the signage and realize that I am seeing her reflection in the newly cleaned mirror of my bathroom while she is walking out behind me from hers. Probably she is wondering why I am backing up and looking panicked.

As I head on in to what actually is my side it occurred to me that I have had or heard of a lot of funny things that have happened around the issue of bathrooms in other cultures and places over the last 20 years of international ministry. I won’t be delving into the ones involving TMI – too much information, and will keep in mind that there are things you cannot simply Un-see even in imagination.

My first though was of an evening outing about 8-10 years ago to see Carmen performed in Ulaanbator, Mongolia. I went with the able coaching and assistance of David and Jan Bayliss who were residing in the city while working with Field Director Batjargal and the staff of FEBC, Mongolia. I headed for the bathroom while David and Jan held onto our seats. I kept wondering if I was going the right way as I went down a hall and then down a couple of ramps, not unlike trying to get out of a major football stadium. I was the only one going down and one after another small groups of ladies kept streaming up the ramp towards me.

As I approached the sinks, I am still the only guy, till one finally walks out from the left row of “cubicles” and I realize its only those that are separated between the two half’s of the bathroom area and the sinks are shared. The opera was excellent, but it was my first time and I was confused. “It’s never over till the fat lady sings” is the old adage in the USA, but there weren’t any thin ladies singing at all. I had to depend on Jan to let me know when it was over.

Like every other aspect of life, those who don’t travel to foreign places think there is only one right way to build a bathroom, a toilet, to “clean up”, and then when you travel you find out that there are several broadly followed plans: the outhouse, the toilet, and the squatty potty. “Cleaning up” is TMI. Even the toilet itself, the ones embodying the phrase “porcelain throne” have different idiosyncrasies in different places. In Japan, they want everyone to be happy with the facilities and are sticklers for getting every detail right. That’s why we all love the cars they design. In Tokyo airport, you can pick between the squatty, the regular toilet and the one with all the bells and whistles.

The fancy electronic toilets have heated seats built in water sprays that are adjustable for pattern, angle and temperature to aid the cleanup process and come with somewhat elaborate buttons and controls on an arm to the side. One thing they almost never include, however, is english subtitles for the oriental language deemed proper at any particular location the toilet is installed. Chris saved me from failing with these new gadgets by having a troubling experience in the electronic toilet in the airport at Narita, Japan. She couldn’t figure out how to make it flush. She tried the controls, could spray water around and even get it to make incredibly loud, realistic flushing noises, but no flush.

When I had the same problem at FEBC Korea, I immediately assumed she had tried all the controls and after some thought took a look at the bigger picture. There, just as you might expect on a regular toilet was a flush lever, manual style, above all the fancy controls on the control arm on the toilet tank. So after messing with all the controls in your jet-lag induced state of mind, remember my blog post and look for the flush lever as usual. Or read the instructions.

In closing, and avoiding TMI, I can say that I have been forced by circumstances and travel destinations to try all of the approved methods of clean up and all of the different types of facilities. My advice is to pack toilet paper with you just like your water bottle when you travel. Yes, you can use the squatty potty, but I recommend you practice in the hotel room first, before you have to do it out in the public bathroom. Hint – with the squatty you want to get your pants in just the right spot……

What happens back home when I am away? My first hope is that all of you are praying for Chris, and if you are local friends, helping her out!  My other hope when traveling in the spring is that the snow falls and then melts to get it out of the way before I come back. After over 15 years living in the tropics I say, “I am so done with snow!” The ICC trip in April kept to these “rules” with several snow events. Chris was not impressed.

Where is James when you need him to shovel? In Georgia or Tennessee. Much too far to call home for a little work.

Also, when “dad” is gone there is a lot of moping around by certain parties, no one to rough house with: 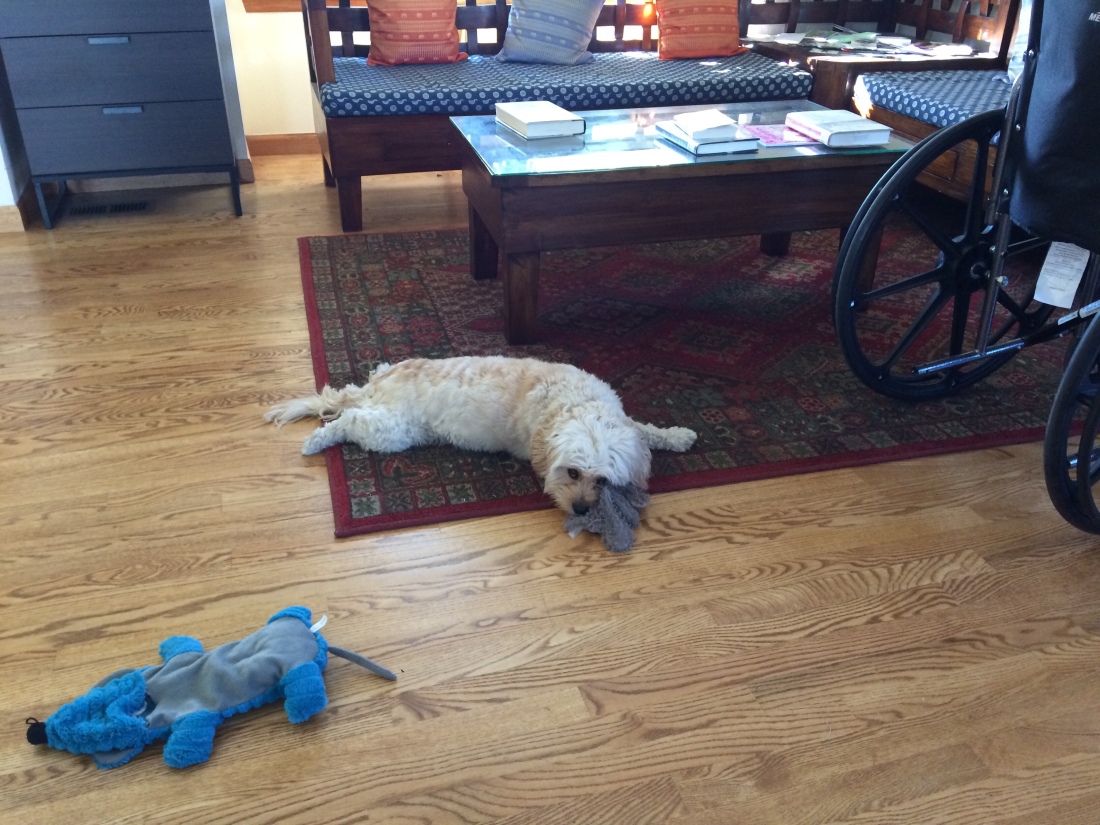 Of course when dad gets back those same parties take a while to forgive for the long absence.

Going on the trip is the easy part. With all the focused, intense work there isn’t much time or energy left to miss anything at the end of the day and the jet lag induced “fall asleep at 8pm whether you like it or not” state helps too. For Chris at home it’s very different. The routine of life makes the time pass slowly and the trip seem extra long. She is the one who really makes the sacrifice.

I have two sayings about marriage, “it’s best to marry a saint”, and “it’s better to be lucky than smart.” We didn’t get married almost 34 years ago because we wanted to spend time apart. For ordinary purposes the travel schedule would be too much, but for a season, for the Lord Jesus, its a sacrifice we can make.

And it’s very nice to be back home.

The FEBC International Engineering Service Team (EST) held the first ever ARRL license testing session at National Polytechnic Institute of Cambodia (NPIC) near Phnom Penh, Cambodia. With four EST members accredited as extra class Volunteer Examiners, we just need to coordinate our travel in order to have the required 3 VEs for an official session. It may seem strange to test for USA licenses in Phnom Penh, but there is a good reason. The infrastructure for getting a local license was lost through the bad times of the Khmer Rouge, but the reciprocity agreement between Cambodia and the US is still in effect. That means that if we train up local Khmer folks so that they can pass the US licensing exam, they can then use their new US license to get a Cambodian license. We have two new Technition licenses and an extra class license awarded as a result of the session.

NPIC renovated their Electronics and Computer Engineering programs some years ago with help from some folks in Korea who we have not been able to identify. We do know that these Koreans were amateur radio operators because they left behind a very complete set of ham radio equipment and antennas. This great shack was sitting idle for some years until the EST, through our locally resident engineer, Mike Adams, made contact with the school and built a relationship with the professors. NPIC thought it might help interest students in radio careers if an amateur radio club could be started and the shack brought back into operation.Some of the professors with the EST in the radio “shack”

Mike Adams (KH0AS) and Guy West (N0MMA), using the reciprocal license agreement received Cambodian licenses XU7AJA and XU7AKA and began the process of checking out the equipment and antennas at NPIC with the help of EST team members David Creel (AH0AM) and Owen Gabbie (ZL1OG). The first year provided opportunities via radio sport competitions to get the professors excited about radio through opportunities to work many countries during international competitive events like the World Wide DX Contest, held each year in November. In the process the NPIC Amateur Radio Club was born. Since anyone can be behind the mic as long as a properly licensed control operator is present, lots of professors and students got to spend time on the radios

What is our motivation?

Why work to bring Amateur Radio back in Cambodia? We have several reasons. First of all, these Khmer folks are great people who are fighting their way back after almost unimaginable destruction of their society. Capacity of local people as engineers and radio technitions and of the institutes of higher learning to train such people was part of what was destroyed. As people who follow Jesus our hearts are broken over what was done and we want to do our part to encourage our Khmer Brothers as they advance their country. Beyond that we know that amateur radio exists to encourage friendship between nations, encourages development of radio technology and provides communications assistance in disaster. Each of these results is good for Cambodia. Finally, we hope by doing our part that one day our local radio stations will be able to hire local people who have been locally trained as engineers and technitions to support the Family FM network and Voice of Love Cambodia NGO.